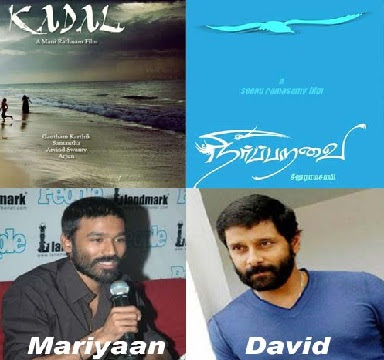 The latest trend in Kollywood seems to be ‘Fishing’. Yes, the current flavor of the season is fishermen stories in K-town.

Tamil films which are currently being shot are based on the life of fishermen and the lead protagonist plays a fishermen.

Topping this list is Maniratnam’s Kadal, which stars Karthik’s son Gautham and Radha’s daughter Thulasi, who make their debut with this movie. The film which is being shot in the seashore areas of Kerala & Tamilnadu, has its plot to be about fishermen.
Same is the case of Neerparavai, directed by National Award winning director Seenuramasamy with Vishnu and Sunaina in the leads. Vishnu plays a fishermen and the film is said to be about how society turns a loser in life in to a human.
Next on line which again has the plot that deals with the life of fishermen is Bharat Bala’s Mariyaan, which sees Dhanush playing the role of a fishermen. The film will see Dhanush playing a guy from a fishing village who goes abroad seeking better fortune. The film was shot Neeradi village in Kanyakumari, where Dhanush was seen sporting a big mustache.
Interestingly, both Mariyaan and Kadal has AR Rahman’s music.
Director Bejoy Nambiar’s bilingual David also seems to have a similar plot. The film is said to be a gangster comedy, which revolves around three characters who are all named David. The film which has an ensemble of cast, which is made in Tamil & Hindi and will also be released in Telugu (dubbed version) has Vikram playing the role of a fisherman named David.
The film’s cast include Neil Nitin Mukesh, Jeeva, Vinay, Lara Dutta, Isha Sharvani, Tabu, Nasser and John Vijay. While Neil & Vinay would play David in Hindi versions, the Tamil version would replace Neil with Jiiva as David.
11 comments 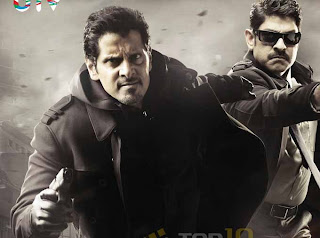 The distribution rights of Thaandavam in the US have been bagged by Prime Media, a event management and entertainment company. Thaandavam is gearing up for release on September 28th and the promos have already created a huge expectation among the movie buffs. In order to capture the attention of the audiences in the US, the filmmakers are planning to include English subtitles as well.

Thaandavam is a magnum opus from UTV Motion Pictures. Directed by AL Vijay, this film stars Vikram, Anuska, Amy Jackson, Nasser, Lakshmi Rai, Jagapati Babu, Daniel Kish and others. GV Prakash has scored the music and songs have turned out to be chartbusters.
35 comments